to go in today’s UofL basketball game against Marquette, I had thrown in the towel. I’d seen this story many times before. I sent a text message to Noelle and told her it was over. Then Van Treese got a steal and dunk. Preston Knowles decided that the rim was no longer too small and started draining 3-pointers and I sent 4 or 5 more text messages to Noelle (because she was at a party and would be interested in these turn of events.) As it turns out, the response I got (That’s nice, but UK is better) was not really what I expected from her. I was sending these messages to my nephew, Austin. Oops. So, instead, I called and told Noelle the final events of the game. What was it? With 12.2 seconds left, UofL’s Preston Knowles got the ball, drove the lane, jumped to shoot; but, being triple defended, dished the ball to an open Kyle Kuric who scored a ring around the basket. UofL leads by 1, 71-70, with 4.0 seconds left. Marquette failed to score and UofL capped, what columnists are writing, a furious win.

In other areas, LSU lost their point guard and missed free throws. Marquette had UofL in foul trouble the whole game, but couldn’t capitalize on it during the end. They also missed an important free throw series, scoring 1 of 2. I give the advantage to UofL on this, they were in foul trouble and were battling the full force of Marquette.

In both cases, the game came down to the last seconds. LSU made an errant baseball type inbound pass that was picked off and UofL was able to trouble Marquette’s lane running shooter enough that his shot was short. Both of these games were won by the same coach using similar tactics: pounding defense and tenacious pressing. It helped that the players started knocking down shots.

Being down by 31 points with 16 minutes left is usually a time when a coach or team throws in the towel and says, “Here’s a practice game, let’s make the best of it,” UK didn’t do that. Being down 18 points with 6.5 minutes left caused a large number of UofL fans to head to the door.

UK’s 1994 win over LSU is totally epic, but I think Pitino is right, today’s UofL win over Marquette should stand as a top 5 comeback win in NCAA Men’s Basketball – it may even be a bigger win than the UK game. The raw analytical numbers bear it out.

7:00 am – I fed Scout and took him outside to do his business. (It’s one of those not-for-profit businesses.) There was just a hint of warmth in the air. I thought, “Maybe I’ll take Rachel and go to the zoo today. It is such a nice day.”

7:30 am – I took the contents of Rachel diaper pail outside to the dumpster. It was sprinkling. It is amazing how just a little rain makes it feel so much colder. I thought, “Maybe we won’t go to the zoo.”

8:00 am – Jeff and I were just sitting down for breakfast (Honey Nut Cheerios and Orange Juice). Rachel was still asleep. All of the sudden there was a long rumble of thunder, then hail was falling from the sky. I thought, “Cool. Where’s the camera?”

So here is a photo of the hail falling in our back yard. Rachel is kind of an active sleeper

Rachel likes to roam around a lot in her sleep. I always put her down to sleep following the long axis of the crib (the 12:00 position of the clock). When I get her out of bed she is always rotated as far as possible. If the crib were wider she could probably make it all the way around in a 360 degree circle. As it is, she is just too tall, so she gets stuck at about 2:00 position. Very rarely she sleeps so completely soundly that she is in the same position when I get her up that she was in when I put her down. Typically, though, she looks like this in the morning (notice her arm is even poked through the rails of the crib): 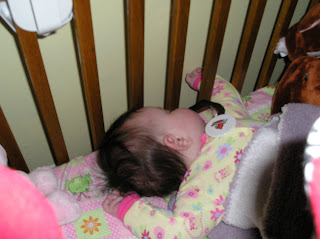 Jeff’s dad called the other day and invited him to go to the U of L/Notre Dame basketball game which was last night. Then, yesterday afternoon he called me to say he had one more ticket available, and did I want to go too (with Rachel). So we got to go to the game. It was a great game. It started with U of L very much in control. They had a fantastic 1st half. The 2nd half was going pretty well until the end when Notre Dame started hitting all kinds of threes that they hadn’t been hitting the whole time. U of L struggled at the free throw line. It was getting kind of dicey with just a few minutes to play. U of L had a few break away dunks, and they held on for a 90 – 85 victory. It was a lot of fun.

Rachel slept through the entire 1st half, but saw the 2nd half. I’m pretty sure she is going to be a great ball player pretty soon.

Back around Thanksgiving I started attending a yoga class. We had to miss several weeks in a row due to bad weather and illness, but last Wednesday we got together again after missing about a month. During that month I started thinking that I need to get more serious about getting exercise, so I decided to attend my Tae Kwon Do class again. (I used to practice TKD quite a lot, but my schedule got to be too demanding after I got married, so my attendance became erratic at best.) So the same Wednesday that I went to yoga after missing a month, I returned to TKD after missing a few years. May I just say that I am SORE! I feel muscles on my ribcage that I didn’t know I had.