A week ago Sunday I called my friend Anne for some medical advice. Anne is a nurse and a mother of four, so she is an excellent resource for information. Not to mention her husband is a doctor. It’s like having my own medical team on staff. So I called Anne to consult with her about Rachel. Rachel has allergies, so I just wanted to get some advice on what I should be doing. During the course of the conversation I mentioned that I have been so tired lately. I figured it was Rachel’s fault, because she hadn’t been sleeping as well as normal, which means I don’t sleep as well either, but that had only happened a couple of days, and I had had plenty of time to catch up on my sleep, but was still so tired that all I wanted to do was sleep. Anne asked “Are you pregnant.”

“Uh,” I said, “I don’t know that I’m not, but I don’t think I am either.” But there had been that one other little thing that made it a possibility, so after I finished freaking out, I decided that the next day, Monday, I would buy a pregnancy test. I did. I passed.

So I called my doctor and told them that I think I’m pregnant. They scheduled me to come in the following Thursday, which I did. (In the meantime I took the second test that was in the box on Wednesday, just to be sure. I passed again.)

So on Thursday in the doctor’s office I took a third test. Turns out the first two tests were accurate. So the doctor told me that since I have 40 years of youth, and the fact that this is my first pregnancy, I am considered high risk. She referred me to an OB who got me in today.

My appointment was supposed to start at 12:50. Now I know that “supposed to” does not equal “actually does,” but still, I waited for over an hour. During that time two other people who I know came into the office. I was finally brought back after 2:00 where I waited for another while in a consulting room. The doctor who came in was very nice, very helpful, and very informative.

I had an ultrasound, and I was able to hear the heartbeat of the little teeny tiny baby, and I got some pictures too. 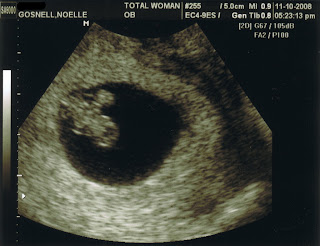 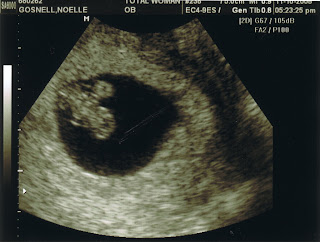 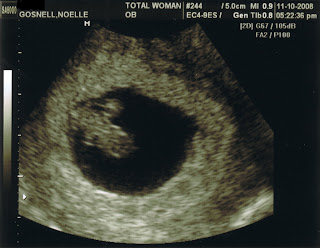